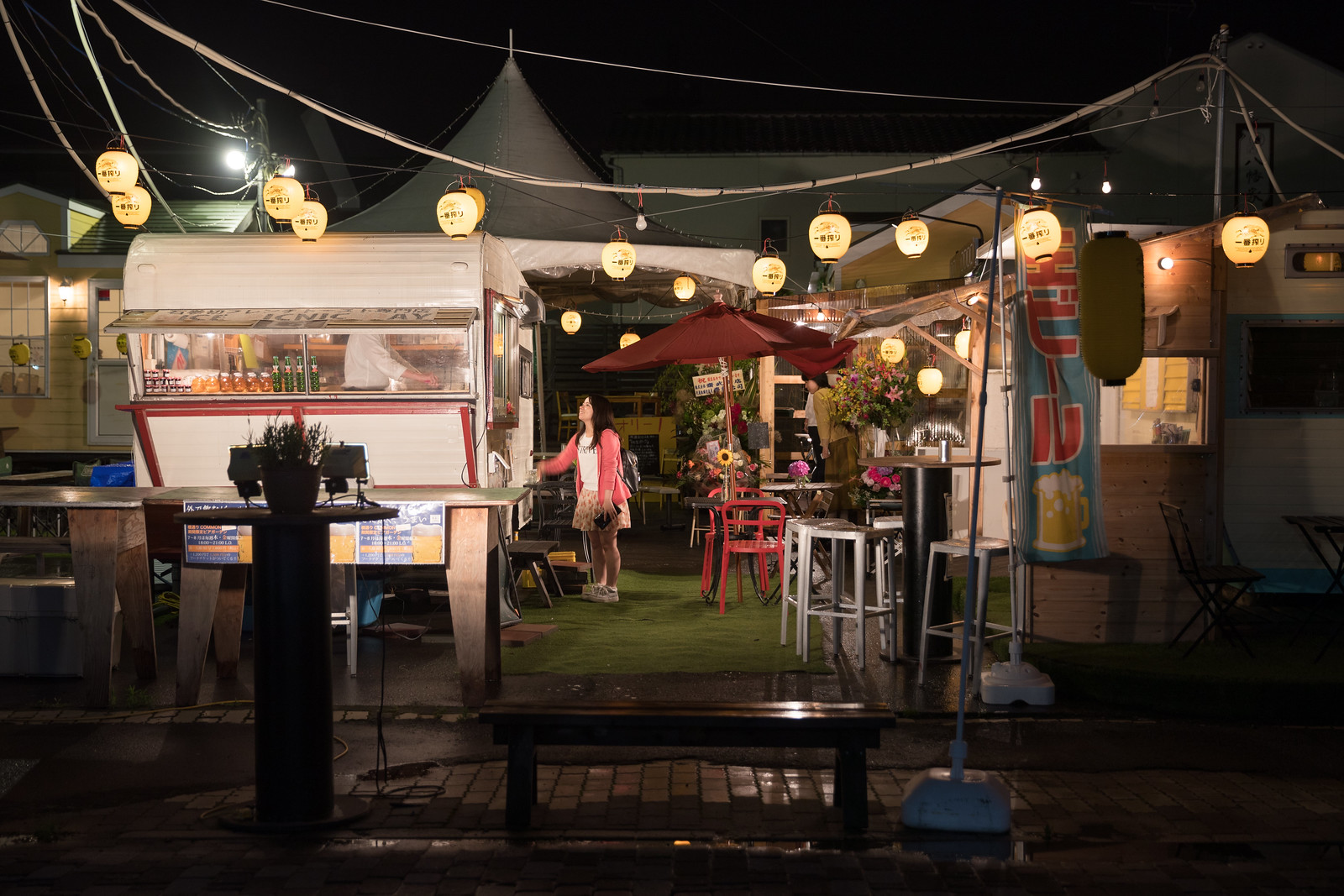 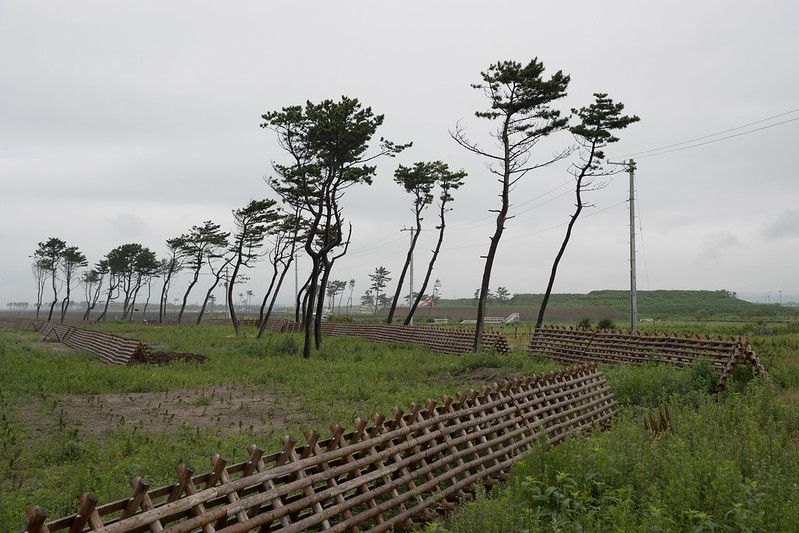 The distinctive rebuilding of the Sendai coast

When Yohei Morita and I visited Tōhoku, Japan in 2014, I was most affected by the areas decimated by the tsunami — but it wasn’t for the reasons one might imagine. With the exception of the cities still in the radiation exclusion zone, most of the quarters destroyed by the tsunami had already been cleared by the Japanese government. In these places, there were few overturned cars, thrashed buildings, derelict streets, or even memorials. With few exceptions, they were remarkably sterile places, with scant clues that the areas had ever been inhabited, not to mention inhabited and then obliterated.

The occasional signs of mayhem, like the gleaming new headstones that filled nearby cemeteries, were amplified by this context, but my main reaction was still to what wasn’t there. I was affected because I couldn’t comprehend what we were witnessing. I wasn’t prepared for this kind of devastation and response.

So when Tanto Tempo Gallery invited me to return to Japan this summer, I set aside half of the trip to revisit Tōhoku to see what had changed and to experience how my understanding of it might change too. My approach would be twofold: to match photographs I made in 2014 and to seek out new areas, particularly revitalization projects.

I will keep the text relatively short, but I should make a few notes before I get into the first set of images. An enormous amount of effort put into the region: nearly all of the towns are cleared, harbors have been reconstructed, flood walls are everywhere, new housing has been built, and people have initiated creative community building up and down the coast. Even so, my main reaction to the place remains: I can’t help but be awed by the openness of coves, the emptiness of places I know were once inhabited, and those shining cemeteries. 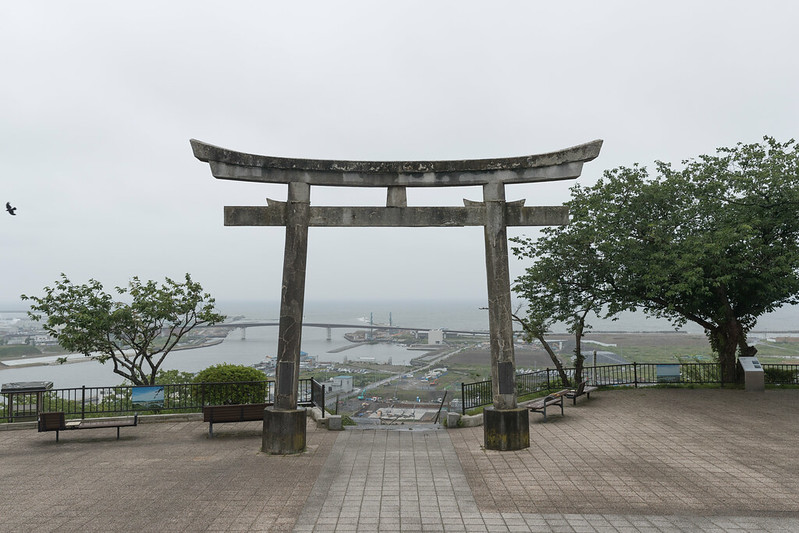 A gate above Ishinomaki

Demolition and construction preparations along the city’s coast

In 2014, Yohei and I spent time with the community activists behind Space for Community, a local advocacy organization and meeting place in Ishinomaki city. After that experience, I knew I’d want to make Ishinomaki a focal point of this trip. I wasn’t able to meet with Space for Community this time around, but I visited with a number of Ishinomaki groups, including Ishinomaki Laboratory, a community-based woodworking shop. There I met with Warafuji, Takahiro Chiba, and David Wang, with whom I discussed the group’s founding, products, and future.

The organization is an hybrid community organization, essentially local but with inspiration and assistance from Tokyo-based designers. Founded in response to the disaster, the group creates and builds furniture with a straightforward, DIY design language. It is also currently strengthening a partnership with a local women’s weaving group to expand their small line of textiles. Their products are not yet available in North America but are available in Asia and Europe. 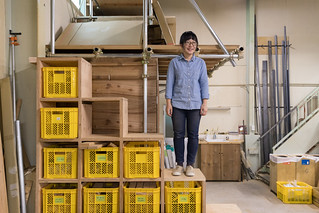 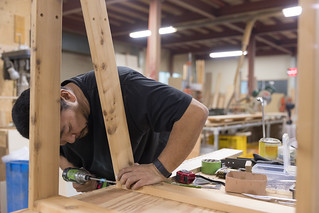 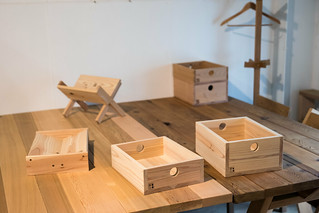 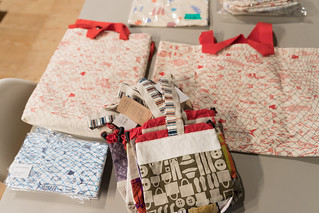 Warafuji and Takahiro Chiba in the Ishinomaki Lab workshop, some of their small wooden and textile products

After leaving Ishinomaki Lab, I took David Wang’s recommendation and headed to Hashidori Common for a meal. The food truck-like establishment was launched to provide opportunities for small restauranteurs to build their businesses while simultaneously creating an informal town square. Even on a rainy night, a dozen people were eating in the semi-covered dining areas. 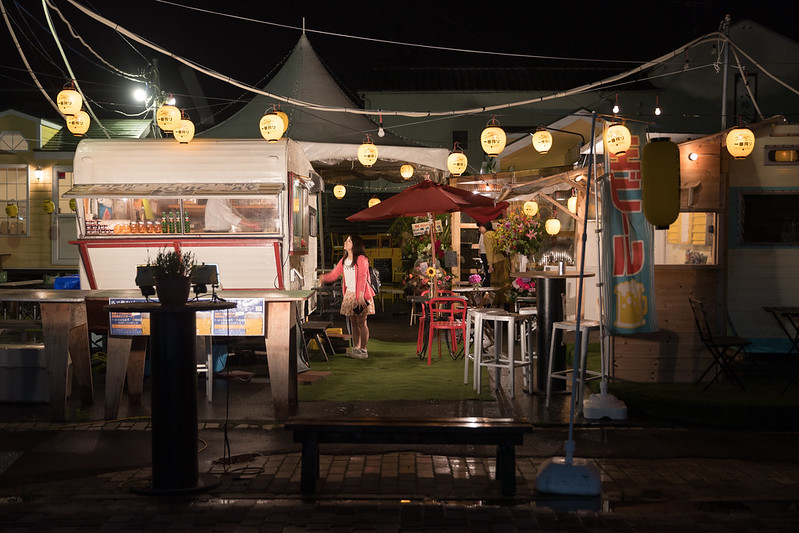 A customer places her order in Hashidori Common

Other than this time in Ishinomaki, most of my visit wasn’t in the town centers but retracing Yohei’s and my previous route through the costal towns and coves. I did make some new compositions during this part of the trip, but I focused on rephotographing the scenes, matching images from 2014. In these areas progress is both monumental and surprisingly slow. 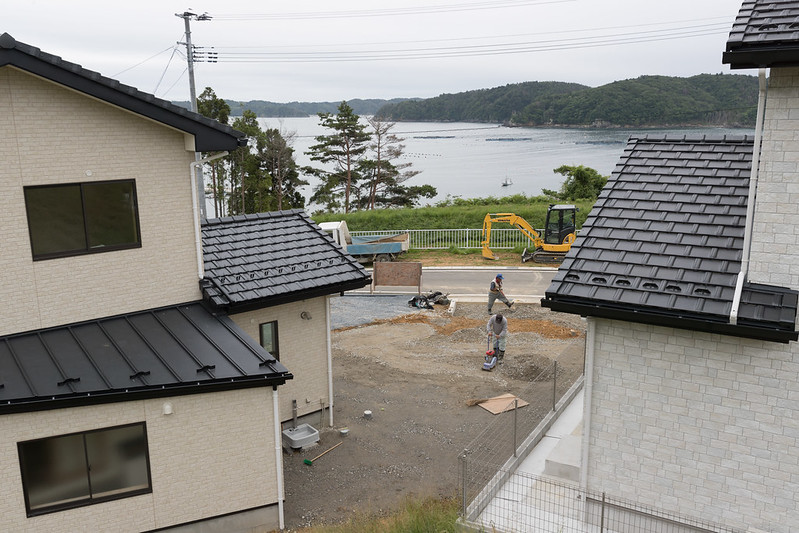 New housing is under construction in the hills above Ogatsucho Mizuhama

The temporary memorial outside Okawa Elementary School has expanded

Tsunami damaged railroad tracks in Higashimatsushima have been removed

Activity continues in some places along the Kitakami River, if with reduced intensity 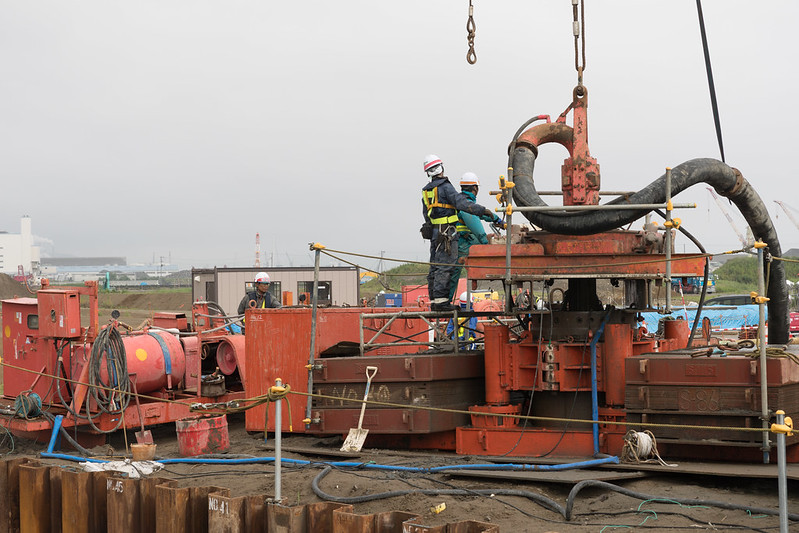 In other locations, construction — particularly flood protection — is as active as ever

Elsewhere, infrastructure development (and hill removal) along the Kitakami River is nearly finished

The Christmas tree and memorial in Ogatsucho Kamiogatsu were long gone 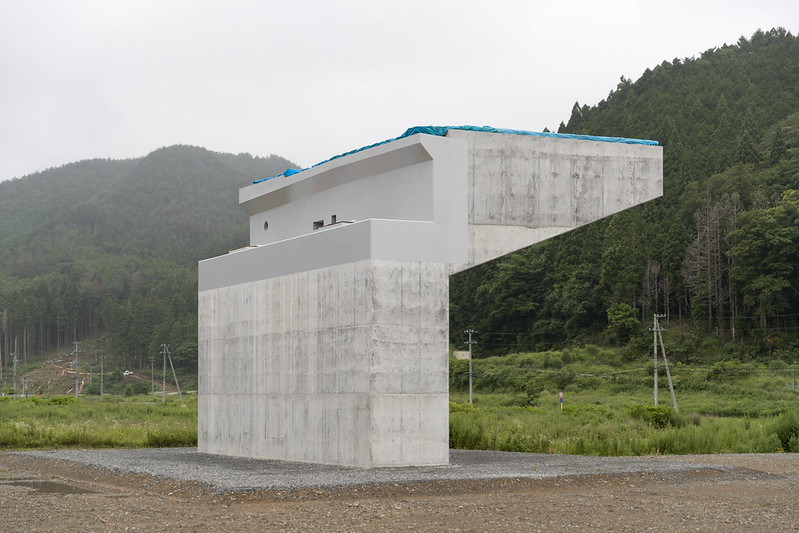 Some infrastructure had an otherworldly feel 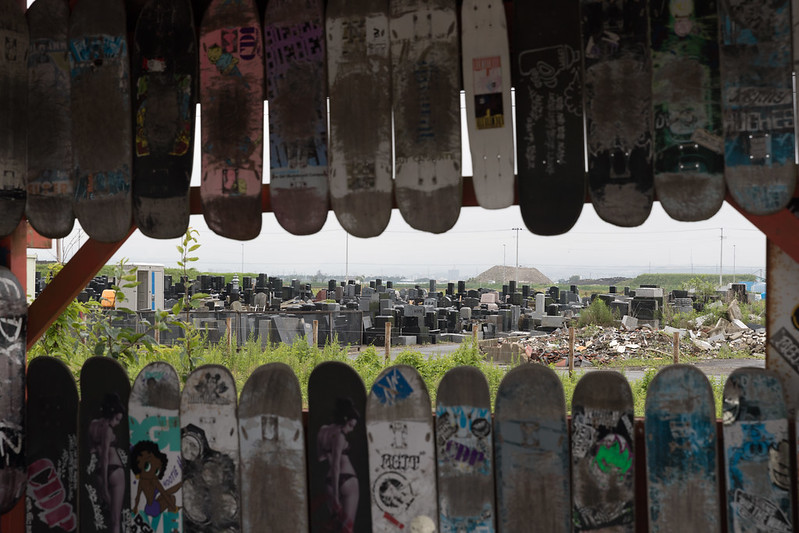 New context had sprouted around some cemeteries, like this skatepark in Sendai

While the emergent theme of the first half of the Tōhoku trip was rebuilding, driving south to the radiation affected area changed the tone. With each mile, the landscape appeared increasingly like my 2014 visit, although with warnings about radiation (and that nagging feeling about whether or not I should really travel into the former exclusion zone).

I was driving to Tomioka, a radiation-blanketed town Yohei and I visited with Deputy Mayor Hirofumi Sanpei. This time I would do the visit alone. While Yohei and I needed to be officially cleared and accompanied to visit in 2014, much had changed in the two and a half years, including that the town’s radiation levels have been partially remediated. As a result, the town is open for some redevelopment. Construction workers move relatively easily, and residents may return to some areas on a limited basis. I wouldn’t need to pass through security checkpoints before entering an exclusion zone, although I was stopped and questioned by the police during the visit.

The newfound opening of the city did not affect much of National Route 6, which — while open — was flanked by temporary gates preventing access to houses and businesses along the road and radiation monitors. Each provided tangible reminders of the area’s invisible contamination. 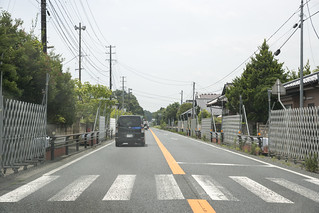 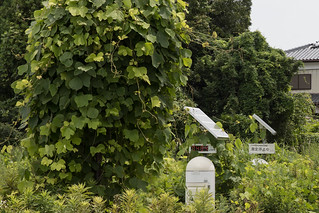 Temporary gates and a radiation monitor along National Route 6, the Rikuzenhama Highway 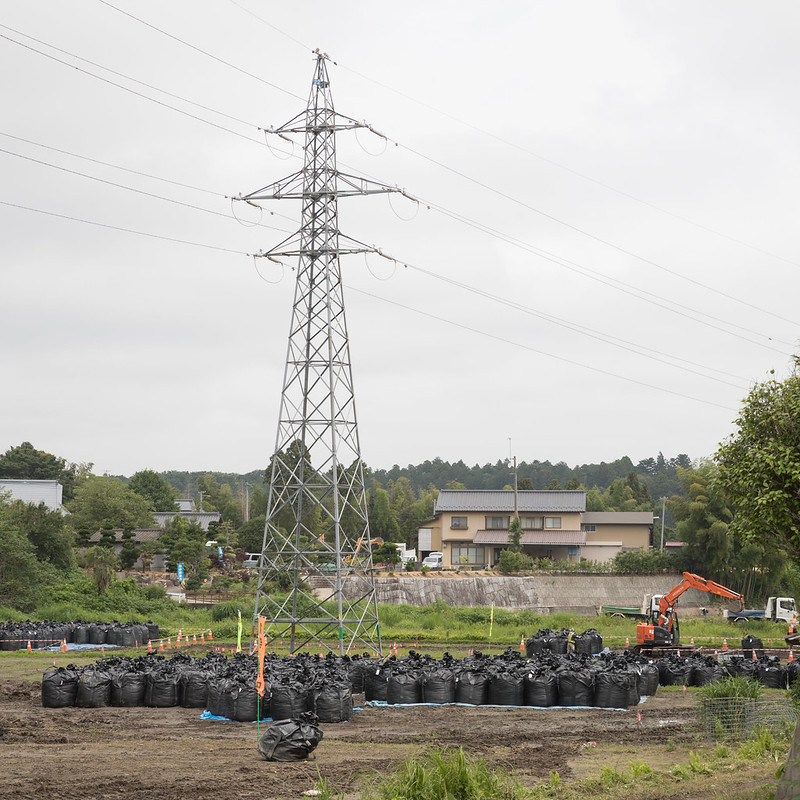 Because I wasn’t with Deputy Mayor Sanpei, I was unable to revisit a portion of the town we visited in 2014, but I was able to see the majority of the town center. Arriving near the old train station, I freely moved among cleanup crews along streets once surrounded by buildings. The area had been cleared of structures, leaving only the streets, a few utility poles, and the hills to remind visitors of what was once there. An occasional dignitary would arrive accompanied by staffers only to take a few photographs with a cellphone and then duck into a waiting car. I was surprised by how the area was both empty and busy. 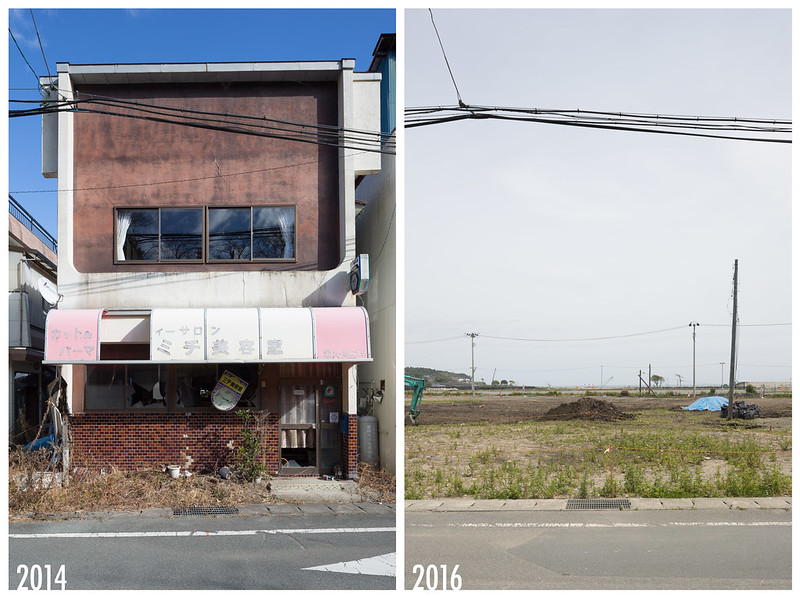 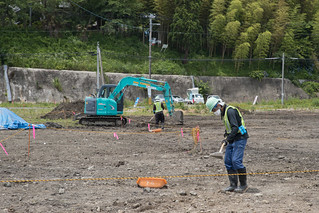 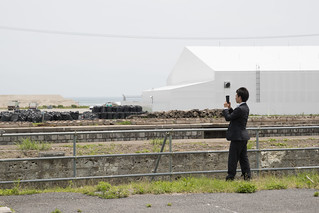 The site of the former Tomioka train station is being reworked

A few buildings were visible away from downtown

Trucks drove where buildings once stood

The concentrated nature of the cleanup effort was clear in the city’s residential neighborhoods, where the streets were near motionless. Along these streets, dereliction is rampant and there are few visible workers. The occasional building has even collapsed in on itself. Here, I regularly stopped my car in the middle of the street to stand on the sills and get a slightly elevated view of the blocks.

After 30 minutes of driving through these neighborhoods I hit the edge of the former exclusion zone and began my long return trip to Tokyo. 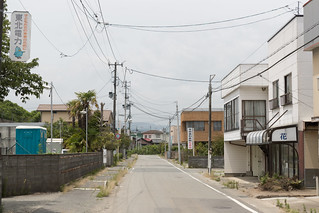 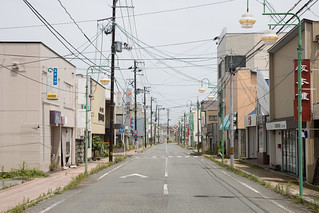 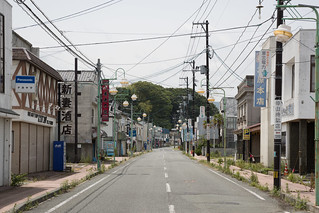 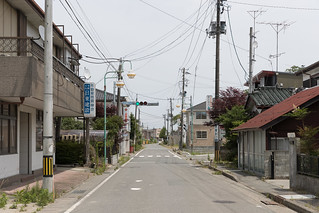 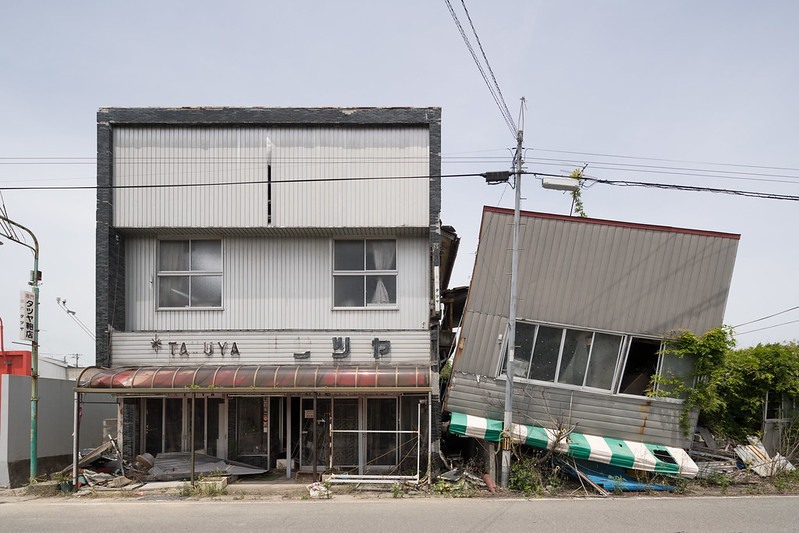 I expected that this visit would be just the second of many trips to Tōhoku, but I was surprised by how much had — and hadn’t — changed in two and a half years. Some of the modifications are masked by the tension between tangible and intangible changes, but the continued need for infrastructure development and residential cleanup makes me especially curious about the region’s future. I left Tōhoku more energized than haunted, and I can’t wait to return.