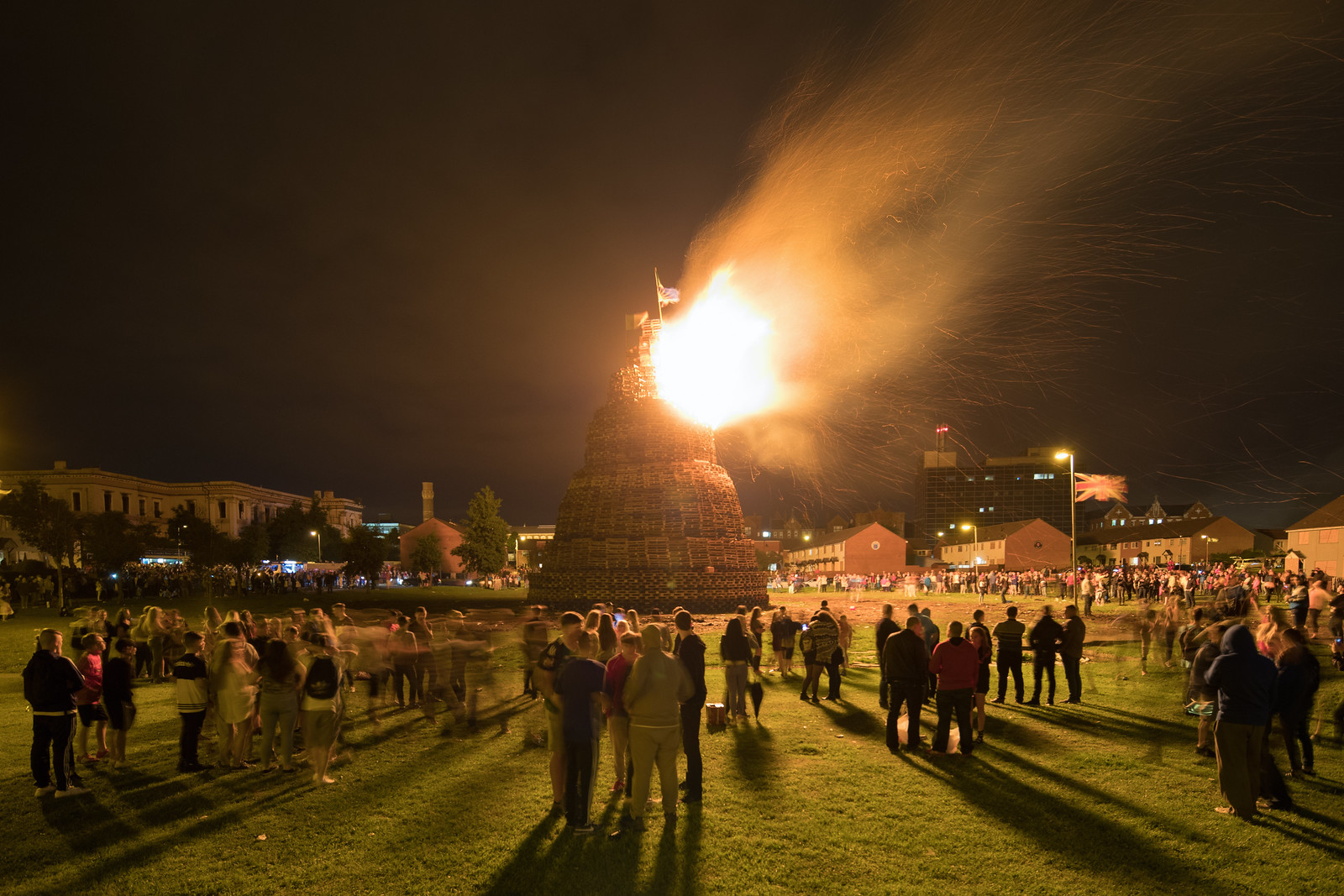 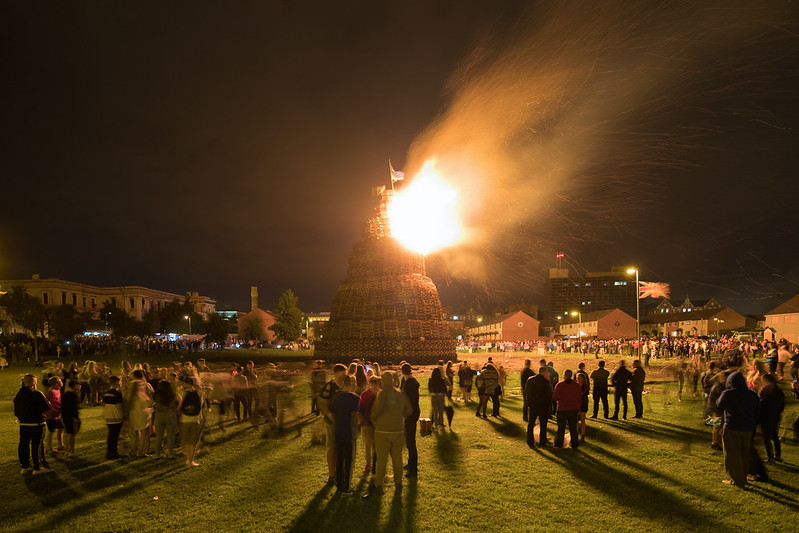 The main Shankill bonfire a few minutes after lighting.

Six years ago, I started a project about two annual events in Belfast, Northern Ireland: the Loyalist bonfires of Eleventh Night and the Orange Order parades of The Twelfth. As I’ve described elsewhere, the related bonfires and parades are often discussed as cultural phenomena, but they are also political affairs intended to reinforce the United Kingdom’s claim over Northern Ireland.

This political character is obvious in the Loyalists’ burning of the Irish tricolor, Sinn Féin election posters, and even Irish soccer team jerseys, but the partisan nature of the bonfires was even clearer this year. Support for the Brexit and disparagement of the European Union abounded, and local political developments related to the bonfires were also referenced. The most direct local example was the burning of election posters for SDLP Councillor Claire Hanna, who champions reigning in the bonfires.

But counterbalancing also occurred: the “beacon” program I referenced in 2012 continued to operate as an environmentally friendly alternative to bonfire construction, and the bonfire and parade events appeared to be changing. Many bonfires were more subdued than before, numerous participants seemed more interested in spectacle than politics, and the city felt less tense than in recent years. The Police Service Northern Ireland was certainly out in full force, but they weren’t needed in the typical way. This was even true for the Twelfth parade routes where riots have occurred during my previous visits.

More detailed background about the situation and selected photographs from my Belfast series are available in main website gallery, which I’ll be updating soon. In the meantime, favorite photographs from this year’s trip are below. 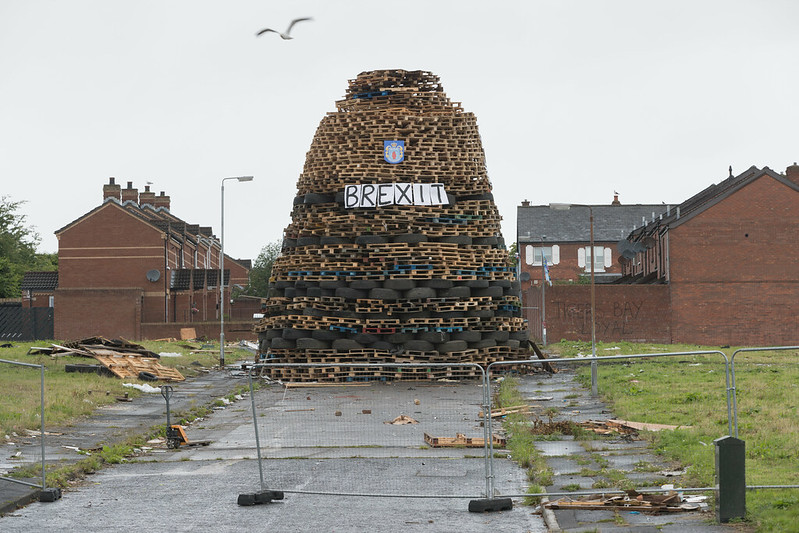 Britain’s recent vote to leave the European Union was celebrated on the Tigers Bay bonfire. The Ulster Defense Association‘s shield is displayed above the “Brexit” sign. 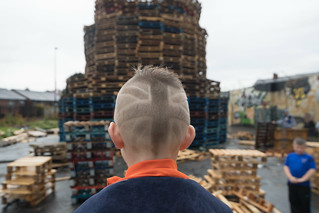 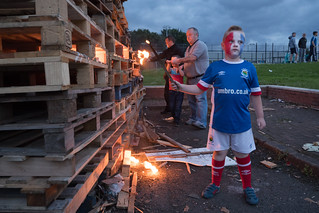 A boy sports a Union Jack haircut, while another poses for a picture before helping ignite a bonfire. 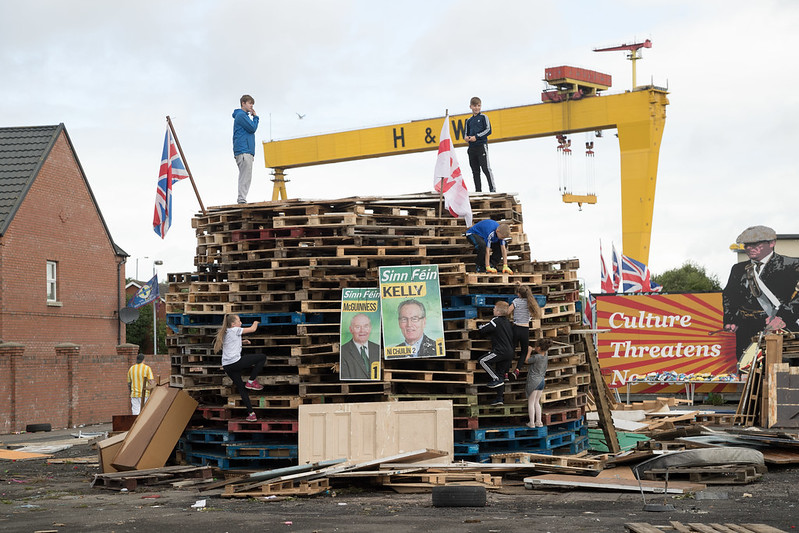 While the Union Jack and Ulster Banner will be removed before the bonfire is lit, the Sinn Féin election posters will not. 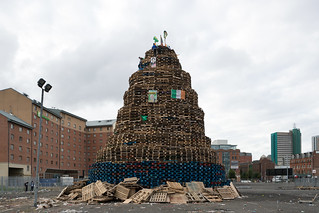 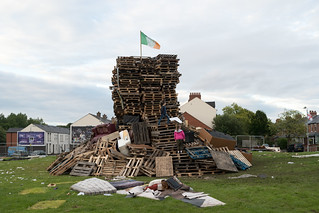 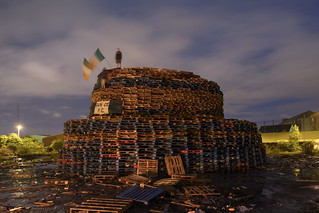 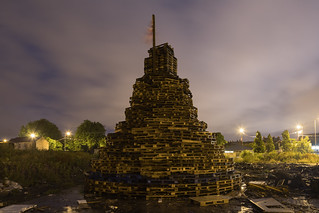 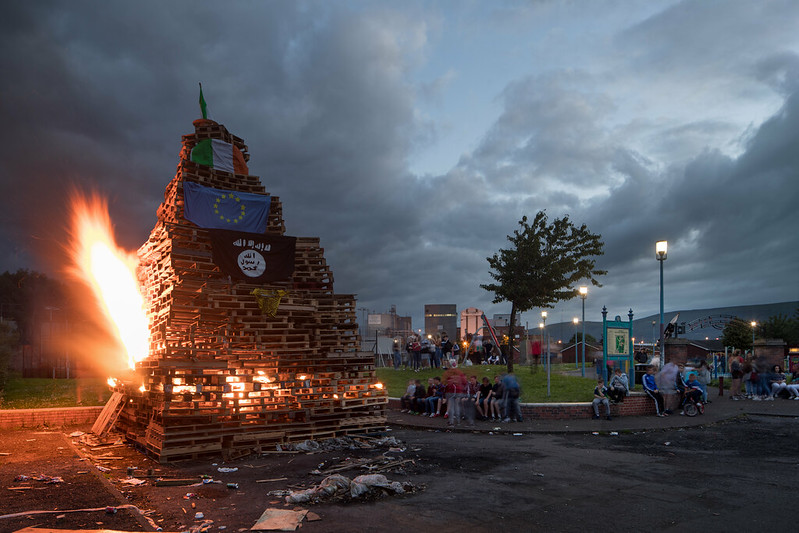 Belfast’s extended twilight makes for some spectacular scenes. This children’s bonfire is dressed with two Irish tricolors, the European Union flag, the Isis flag, and a jersey from the Celtic Football Club. 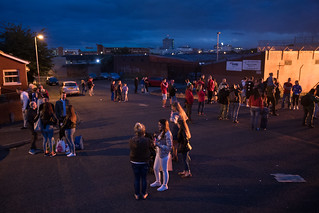 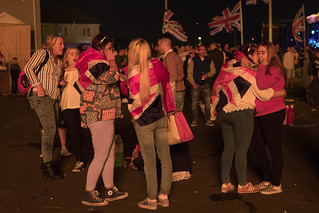 Socializing at the bonfires. 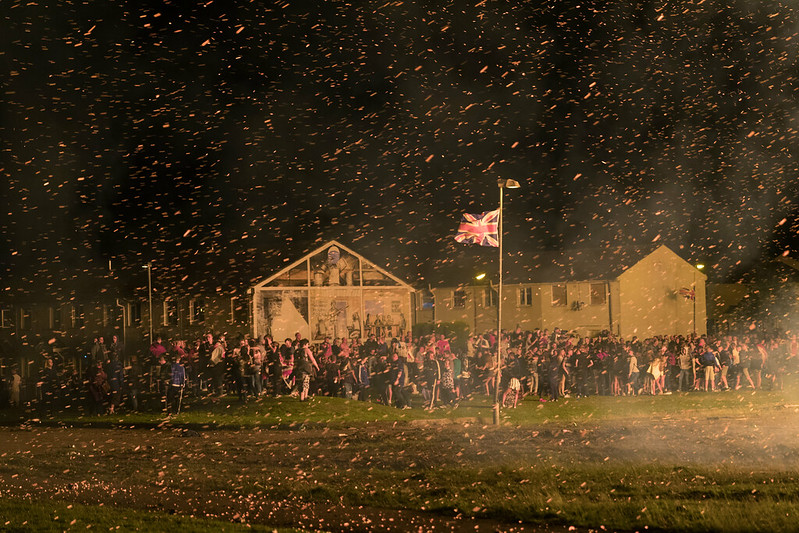 A shower of embers from the Shankill bonfire. 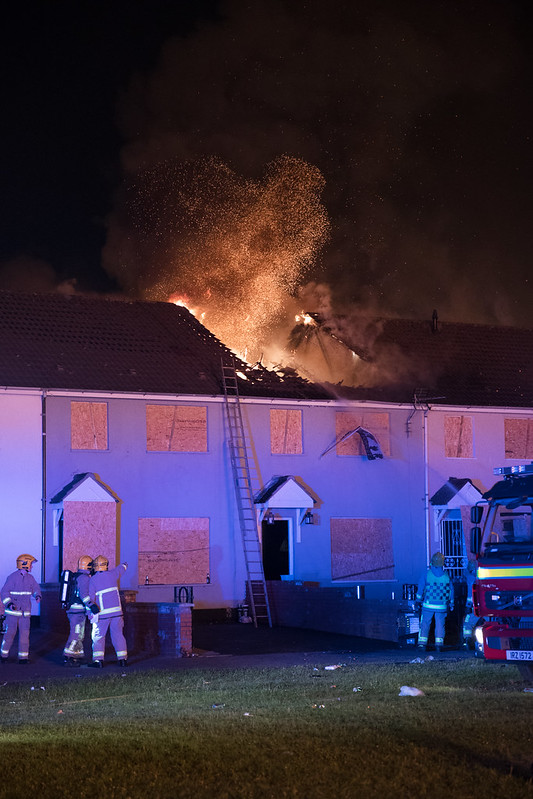 Despite boarding up windows and doors to protect houses from the Shankill bonfire’s spectacular embers, the roof of a nearby row house ignited, destroying multiple units. This is the moment the first roof collapsed. 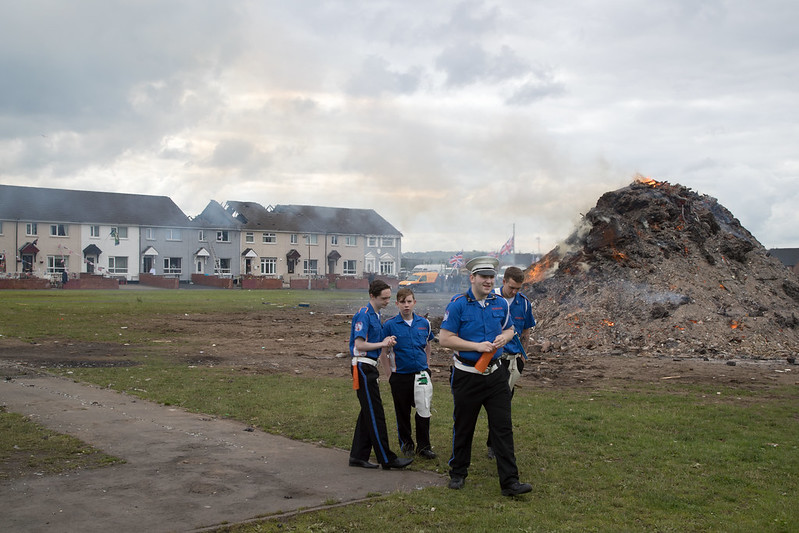 Young band members visit the smoldering remains of the Shankill bonfire before parading through the city. The damaged row houses are in the background. 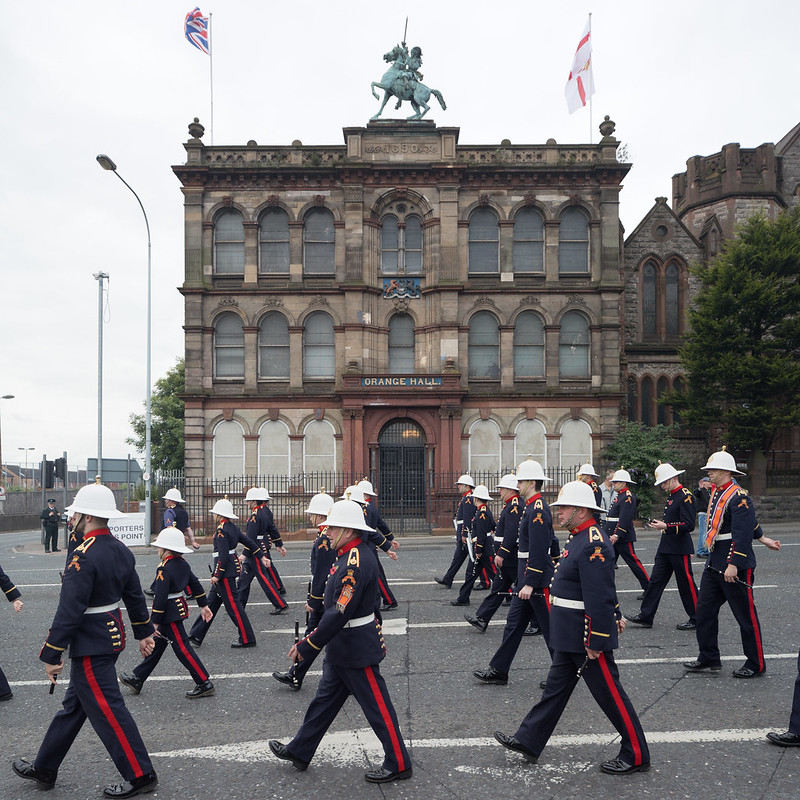 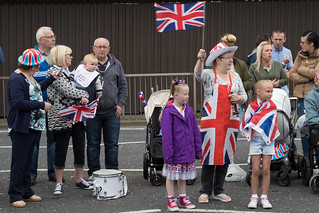 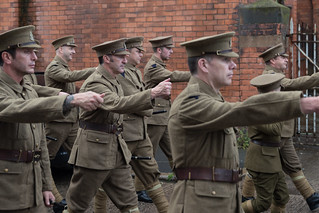 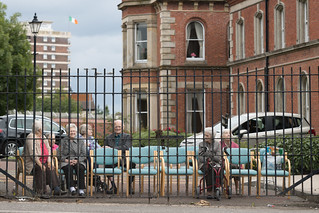 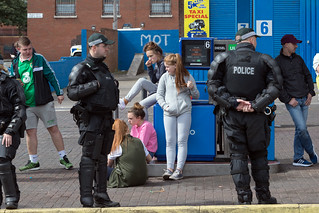 Some watch the parade, others participate. 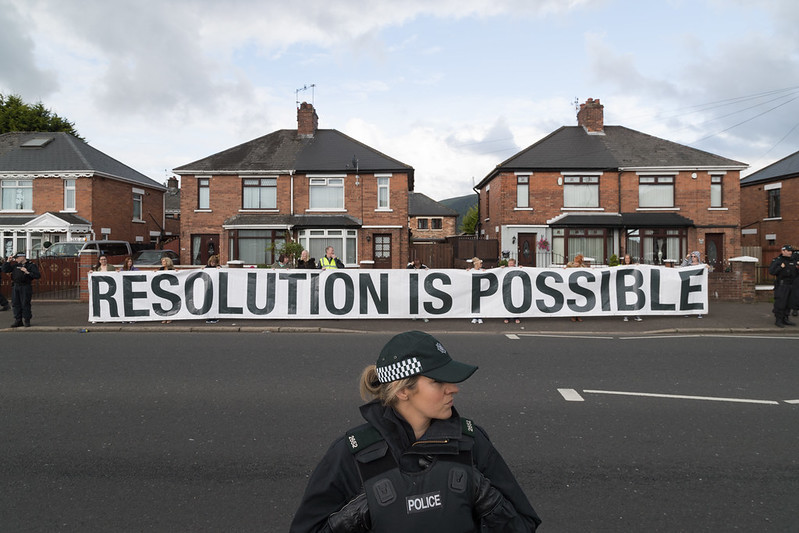 Residents protest a parade route that skirts a Catholic neighborhood. 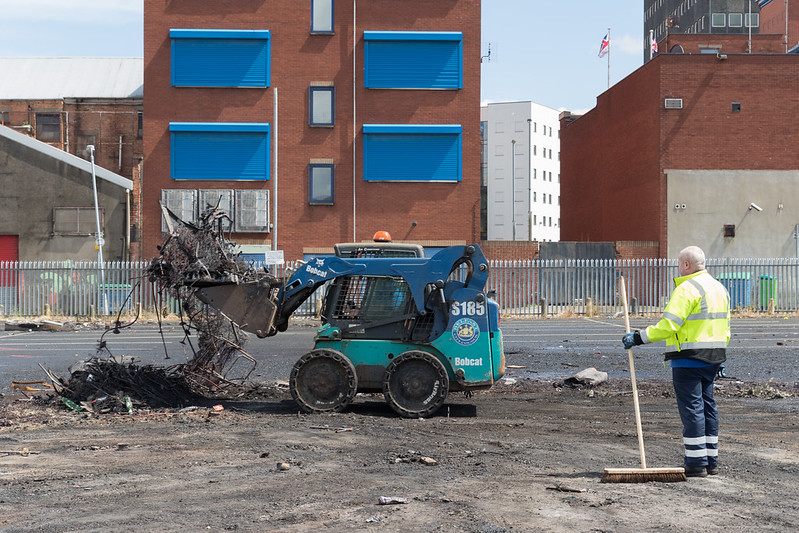 Cleaning up the after the bonfires requires multiple work crews operating over several days. This team is taking a first pass at a site near the city center.

One thought on “Bonfires and Brigades in Belfast”